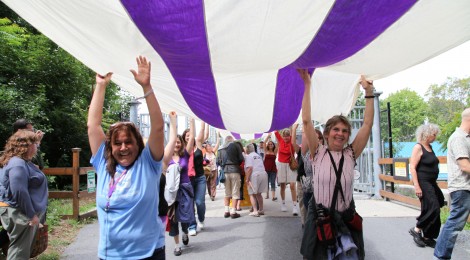 The Vasudha Living & Learning Community will be hosting its fourth and final speaker in residence for the Spring semester. The Vasudha Speaker in Residence Series brings experts from around the Northeast to the Rensselaer campus to talk with students, faculty, staff and community members about the grand challenges of the 21st century. Instead of a formal lecture, the Speaker in Residence will facilitate a guided conversation over dinner. Each speaker brings a unique perspective and approach to tackle today’s major social and environmental problems. Students in particular are encouraged to attend these important conversations in an effort to cultivate both knowledge and perspective about the grand challenges of the 21st century. For April you will hear Onondaga Clanmother Wendy Gonyea and Two Row Campaign Coordinator Andy Mager discuss the history of the Two Row Wampum and its implications for treaty rights for the Haudenosaunee and other Native peoples and related environmental issues.

The Onondaga Nation exists in the midst of a highly developed American society located in the woodland area of Central New York. The Onondaga Nation continues an ancient way of life complete with language, government and ceremonies throughout four centuries of contact with newcomers to the American continent.

The Two Row Wampum Renewal Campaign, a partnership between the Onondaga Nation and Neighbors of the Onondaga Nation (NOON), traveled throughout New York State in 2013 sharing the history of the first treaty between the Haudenosaunee (Iroquois) and European settlers and asking people to consider what it means 400 years later. A focal point of the campaign was a paddling journey from the Onondaga Nation just south of Syracuse to New York City. On the second leg of that journey, hundreds of people paddled in two rows down the Hudson River bringing to life the treaty’s model of living side-by-side in peace and friendship. The statewide project seeks justice for the Haudenosaunee by polishing the chain of treaties established by the Two Row. Environmental cleanup and preservation are core components of the campaign. Andy Mager has been active in movements for peace, social justice and environmental protection for over 30 years as an organizer, trainer, activist, writer and speaker. Andy began working with people at the Onondaga Nation in 1982 and is a cofounder of Neighbors of the Onondaga Nation. Andy coordinated the development and implementation of the highly-acclaimed year-long educational series “Onondaga Land Rights and Our Common Future” which was carried out in 2006 and again in 2010. Andy serves as the project coordinator for the Two Row Wampum Renewal Campaign.

Along with dinner and a conversation Wendy and Andy will be screening Guswenta: Renewing the Two Row Wampum, a short film by Gwendolen Cates, won the award for best short film at the Rated SR Socially Relevant Film Fest in New York City.

This 33-minute film features stunning footage of the 28 day paddling journey from the Onondaga Nation to the United Nations in New York City during the summer of 2013, along with powerful words from Haudenosaunee leaders including Onondaga Faithkeeper Oren Lyons, Onondaga Clanmother Freida Jacques, Mohawk spiritual leader Tom Porter, and Tadodaho Sid Hill. The film inspires people, indigenous and non-native, to consider our collective responsibility 400 years after the Two Row Wampum Treaty was created. Gwendolen Cates is an award-winning independent documentary filmmaker, photographer, and author.  For many years she photographed well-known people including Rosa Parks, George Clooney, Kevin Costner, Halle Berry, Matthew McConaughey, Leonardo DiCaprio, Bill Murray, and Madeleine Albright forRolling Stone, Fortune, People, Parade, and many other national and international magazines.  Her critically acclaimed photography book about contemporary Native Americans, Indian Country (Grove Press 2001) was one of the top ten USA Today illustrated books of the year, and was featured onOprah.  Her debut multi-award-winning documentary film Water Flowing Together, a portrait of Navajo/Puerto Rican NYCB ballet dancer Jock Soto, had its broadcast premiere on PBS Independent Lens in 2007.   Mourning in the Garden of Eden, a documentary film about the humanitarian and cultural heritage crisis in Iraq, is still in production.  Cates is currently working on a feature length film about the Onondaga Nation.  She lives in New York City.